An Inquiry to “Cliff Village”: Who is to Seek the Solution to the Pending Issue of Road Building 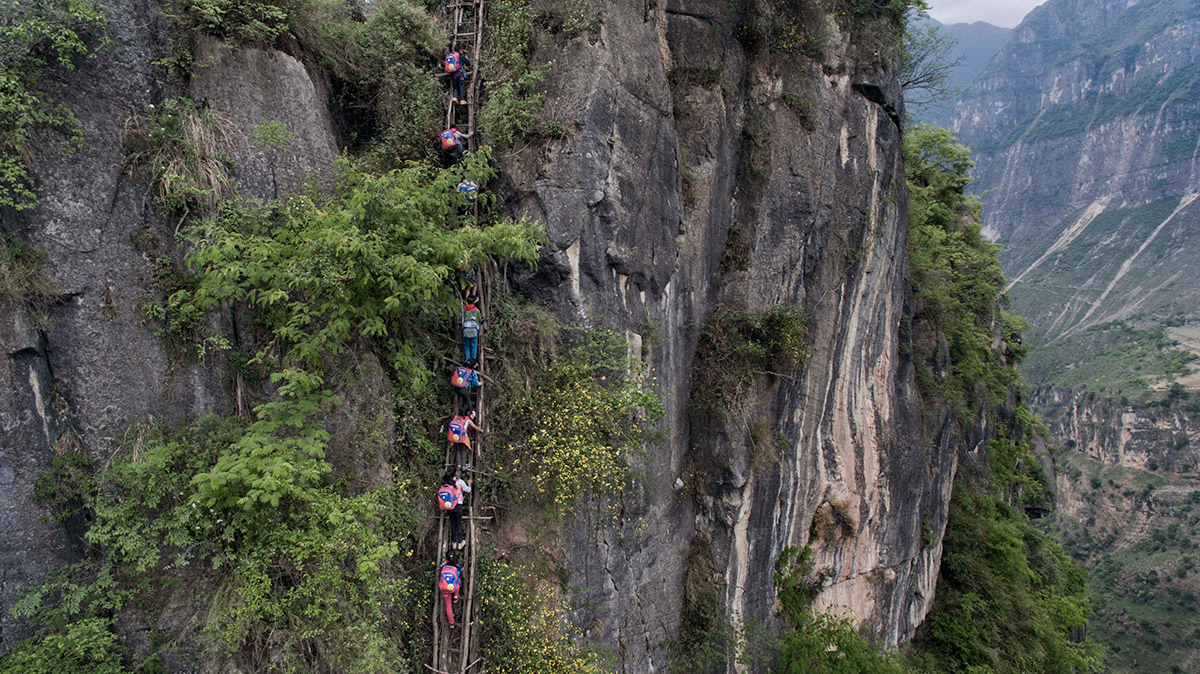 On May 14, under the wing of 3 of their parents, 15 children set out on the way home from Le’er Primary School, walking on slopes and climbing the rattan ladders. (Shot by Jie Chen, chief journalist from The Beijing News) 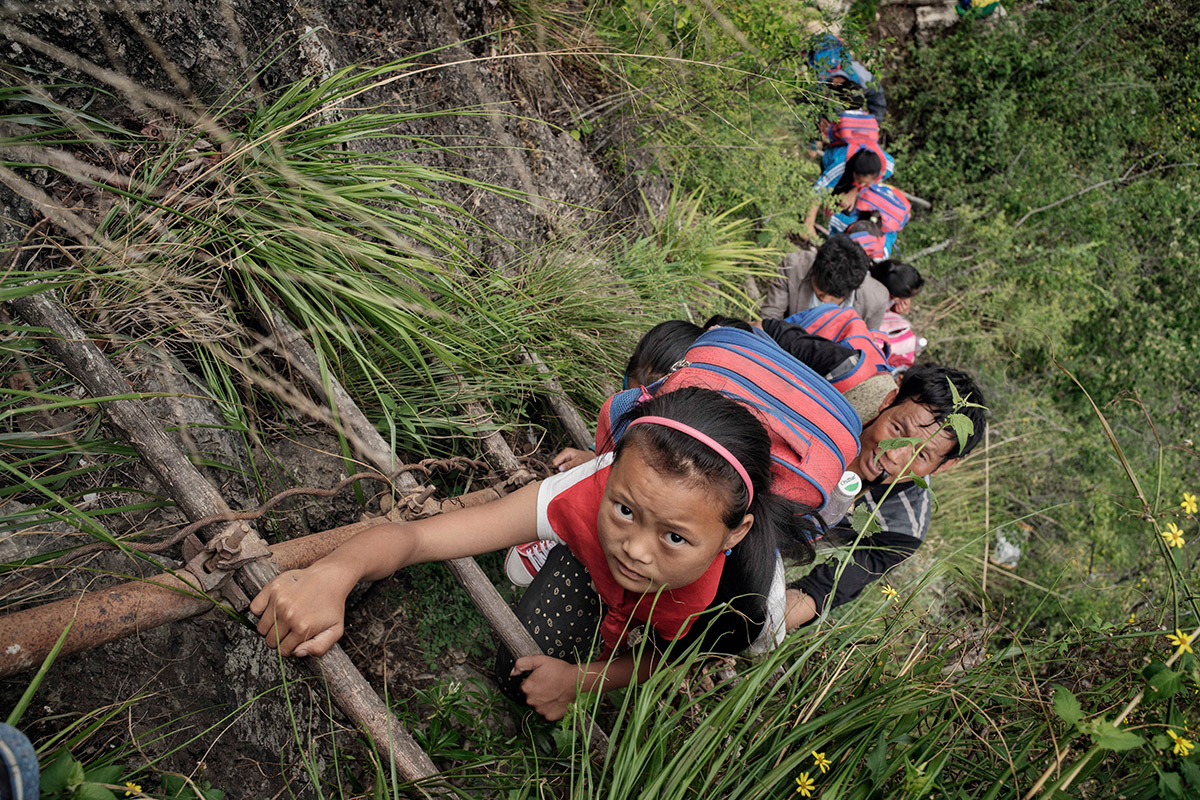 Of 15 children, most are girls. Under the protection of 3 parents, they were carrying heavy school bags on the back to walk about 2 hours before reaching “Cliff Village”. (Shot by Jie Chen, chief journalist from The Beijing News)

This isn’t film scene, but the children from Atule’er Village, Zhiermo Township, Zhaojue County, Yi Autonomous Prefecture of Liangshan, Sichuan Province on the way to school.

With heavy school bags on their back, the oldest being 15 and the youngest 6, these 15 children, protected by 3 parents were walking on the slope without protective fences and climbing the rattan ladders……Covering the way for once takes around 2 hours; they have been walking like this many times.

Because they are living on cliffs in remote mountains and this is the only way opening up to the outside world for them.

Why don’t they move?

It is difficult for the children to go to school, for the villagers to make a livelihood and for the men to get married. Why not leave such a poor place as early as possible? It’s easier said than done. Relocation, in others’ view, is just the change of residence, which however, means taking a leave from the native land to these local residents. How can they easily make such a decision? How many memories of this small village have their forefathers for generation upon generation left in the history of more than 200 years? Even if they are resolute enough to cut themselves off from it, who can guarantee they will live better in future than at present?

The real difficulties are: with relocation, they might lose their land, or even source of livelihood; living in the city, they can only do tough manual labor and will have difficulty in coping with the high living cost; the one-time relocation fee of tens of thousands of yuan is utterly inadequate.

Besides, the local producing condition is good with decent soil and water to grow high yields of crops, green prickleyash, walnuts, oranges and others which are also of high quality. To the villagers, the fertile land is just the source of hope.

What they only need is a road—-a safe road to link them up with the outside world. With the road, they shall never worry about their children’s safety on the way to and back from school and about being forced to lower the price of the crops out of their arduous efforts; they can buy larger items for their family and transport the livestock down the mountain to sell; not only can they get rid of poverty, but also open the village to external development.

How difficult is it to build a road?

The road to Shu is steeper than Heaven, a decolouring, youth-draining, and courage-wearing trip, ” as the famous Chinese poetic lines go. To the people of Atuleier Village, this cliff rattan-ladder road is just like the difficult road to Shu; to Zhiermo Township and even Zhaojue County, to build a road is as difficult as flying high up to the Heaven.

To Apijiti, secretary of the Party committee of Zhiermo Village, from the perspective of safety problem alone, fixing the steel ladders in place of the original rattan-based ones to the current cliff road with the addition of protective fences will cost no less than millions of yuan.

Jikejinsong, office secretary of the Party committee of Zhaojue County said, to get through the road, with the nearby roadless Yiwoajue Village and Shuzhu Village counted in, costs up to 50-60 million yuan, of which 50% has to be collected by the villagers themselves.

According to Apijiti, nearly all the income of Zhaojue County where there are not many merchants comes from family-run stores and the government revenue is still low. 2004 and 2007 saw relevant plans come out when the county government could only provide little more than 200 thousand yuan for road-building.

The road planning of Cliff Village can be dated back to late 1990s. Without guarantee for the absent fund, the planning could then only be implemented in the region with good construction conditions,” added Jikejinsong.

That’s why the road-building project of Atuleier Village has been repeatedly held up for a dozen years.

So in the implementation of the “targeted poverty alleviation” policy, Zhaojue County can send its first secretary of the Party committed to the locale to select the targets of poverty alleviation from door to door, help the villagers bring in green prickleyash and graft walnut seedlings, intensively run a school on the highway at the foot of the mountain, and even invest 1 million yuan in getting sheep and goats for each household except for the road-building cause which is being considered by the government on a day-to-day basis but unable to be handled.

Because of no money.

Therefore, the Atuleier children still have to walk on the verge of danger now and then with Atuleier Village itself unable to have access to the same public services like medical treatment and education as the other villages. The initially small self-supporting and self-sufficient village has been left far behind by the times.

Because of no road.

This is a vicious circle but should not be a dead circle. First, village, township and county are not enough to form a closed loop; second, how can the difficulty of the government compare to the helplessness of the children climbing the vine ladders for years?

It is not a question of ability but one of readiness. The reason why Cliff Village’s road building is still a pending issue is that an important consideration is involved: input and output.
为这么少的人，花这么大的代价，值吗？ Is it worthwhile to pay more for fewer people?

Atuleier Village has a total of 72 households. Even with Yiwoajue Village and Shuzhu village considered, the three villages altogether have 300-odd households of 1420 people. In Jikejinsong’s words, it costs too much to build the road at about 60 million yuan but the number of residents up the mountain is small—-an ill-matched input-and-output relationship.

From the perspective of primary school level mathematics, dividing 60 million yuan for 1420 people rounds off per capita 42254 yuan. This is the so-called “input” but without specific “output”. And whether or not the government makes strategic decisions in the light of such mathematical operation thinking is unknown to us. So the “ill-matched” statement is hard to judge.

According to CCTV’s report “Cliff Village’s Poverty Alleviation Chronicles”, the annual fiscal revenue of Zhaojue County is 100 million yuan, of which, basically an equivalent of one third has to be invested in building the road; there are another 33 roadless villages under the jurisdiction of Zhaojue County and spending half of the fiscal revenue on a village’s road building is not realistic in a short span of time.

Zhaojue County hopes to tap into the locally rich tourism resources, utilizing “poverty alleviation through tourism” to bring about the change in the course of protective development.

The leading scientist Yang Yong from Hengduan Mountains Research Institute said that the grand canyon where Atuleier Village is situated in a world-class landscape with the high ladder of the village being the “living fossil” to symbolize the human survival in sinister life environment in modern society and the “living specimen” of the human experience, in addition to the concentrated canyon groups in the form of “valley in valley”.

Can this be another mode of “input and output”?

Lin Shucheng, secretary of the Party committee of Yi Autonomous Prefecture of Liangshan has indicated that first of all a steel-structured ladder way will be constructed to settle the safety issue of the common people’s getting around and then the demonstration of the absolute solution will be organized.